THE ART OF THE CHURCH

To begin with Moses means to begin with the first five Books of the Tanakh---Hebrew Scriptures or Old Testament. Well ’twas Jesus Our Lord who did this. He went through all the books of Moses, the Prophets and the Psalms and explained to His disciples all the passages of the Scriptures that referred to Himself. St. Luke records that Jesus Our Lord did this on two separate occasions, so my question is “Why do we not have an exact copy of all that Jesus Our Lord said to them on these two occasions after He rose from the dead?” Did what Jesus say to them take several hours or by a special infusion of knowledge did He simply ‘open up their minds’ and teach them in that manner?
Water Stories

In the beginning, the Holy Spirit of God breathed on the waters, making them the wellspring of all Holiness. The waters of the great flood made the end of sin, and a new beginning of goodness. Moses led Israel through the waters of the Red Sea, an image of God’s holy people set free from sin by Baptism. Water and blood flowed from the side of Christ; the New Adam, as He hung upon the cross. From the wounded side of Christ, the new Adam, God forms the Church, the Bride of Christ---Water for Baptism, blood for Holy Communion. The waters broke on the day of your birth and broke again when you were born again in Baptism. If anyone is in Christ, he is a New Creation.
You are a priest---at every Mass you offer yourself with Jesus to God the Father. You are a prophet---you are to witness to Christ by all you say and do. You are a King---you are to reign with Christ forever and ever. ​
The Stained Glass Window

For many parts of the Bible the question: “Did it happen?” is the wrong question. The right question is: “What does it mean?” Take for instance, the story of Jonah being swallowed by the big fish. Did it happen? I’ve no idea. Now ask the question: What does it mean? Jonah and the big fish is a prophetic story pointing to the Resurrection of Jesus. Just as Jonah spent three days and nights in the belly of the big fish and was spit out, so did Jesus spend three days and nights in the belly of the earth and on the third day rose again.

Now apply the question: What does it mean? You and I have been bitten by the serpent. To sin is to be bitten by the ancient serpent known as the devil or Satan. Who saves us---Jesus. At one stage Jesus said: “Just as Moses lifted up the serpent in the desert---so I must be lifted up on the cross, and when I am lifted up, I will draw all mankind to myself.” So Moses’ bronze serpent lifted up on a pole is pointing to Jesus being lifted up on the cross. By turning to Jesus, we are saved. If you confess with your lips that Jesus is Lord and believe in your heat that God raised Him from the dead, You will be saved. 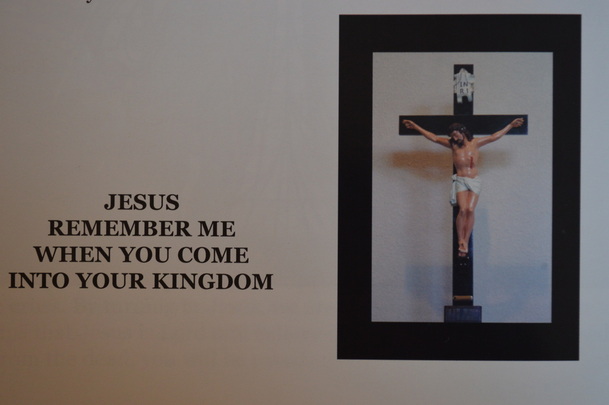 Just by looking at her, you could tell that she wasn’t “all there.” Even in the intense heat of the Florida summer, she was dressed for a northern winter. She walked the streets of Cocoa-Rockledge picking up trash from the streets that, “the sane people” had dumped there. Everybody called her Willie, and everybody said she was shell-shocked during World War II; but who knows for certain.

​Then came the day that friends of mine found her wandering the streets of Cocoa-Rockledge carrying something wrapped up in a piece of industrial plastic. Big tears were rolling down her face. In Willie’s “not all there mind,” something tragic had happened. When my friends peeled back the plastic, “The Cross” pictured here was inside. Willie found it in a dumpster where she had gone to put the trash that sane people had dumped on the streets. Willie was driven wild with grief and could not be consoled until my friends said, “Do you remember Father O’Doherty?” She did. “We’ll give the Cross to him” and somehow Willie was consoled. This Cross hangs in the Mary Chapel behind the ambo.  It used to be the Altar Cross when the parish hall was our main sanctuary.
On the mountain, Abraham binds his son, lays him on the altar and is about to kill him when an angel of the Lord stops him. Abraham turns around and sees a ram with its horns caught in the thorn bush, and this ram he offered instead of his son. Again the question: What does it mean? This, too, like Moses’ bronze serpent, is pointing to Calvary. God spared Abraham’s son but did not spare His own Son, offering Him up for the sake of us all. Even the ram with its horns caught in the thorn bush points to Jesus’ crown of thorns. The book of Chronicles identifies Mt. Mariah as the mountain of Jerusalem where Solomon built his temple. Abraham is thus the first to worship there, and Jesus offers Himself to God from this very same mountain, which is now called Mt. Calvary or the Place of the Skull.

And now I lay me down to sleep.
I pray the Lord my soul to keep.
There are four corners to my bed,
there are four angEls over head.
One to watch, One to pray;
​Two to lead my soul away.
Matthew, Mark, Luke, and John,
Bless the bed that I lay on. ​

Gold: He will be king! Over His head on the cross I.N.R.I. (Jesus the Nazarene King of the Jews). Frankincense: He will be priest, the offering of Himself, a sweet smelling sacrifice. Myrrh: an embalming agent, He will be victim for our sins. ​ 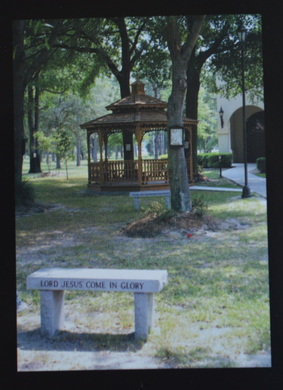 Because God has chosen to call our brother/sister from this life to Himself, we commit his/her body to the earth, for we are dust and unto dust we shall return. But the Lord Jesus Christ will change our mortal bodies to like His in glory for He is Risen, the First-born from the dead.

The cremated remains of more than 70 people are buried in our Memorial Garden.
Stations of the Cross Outside of the Church 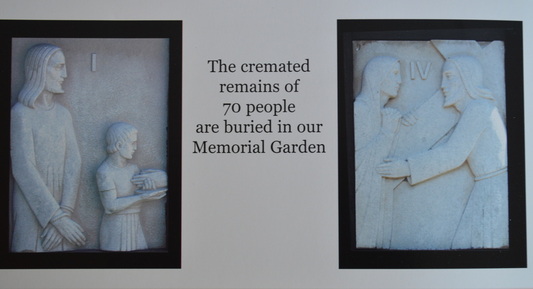 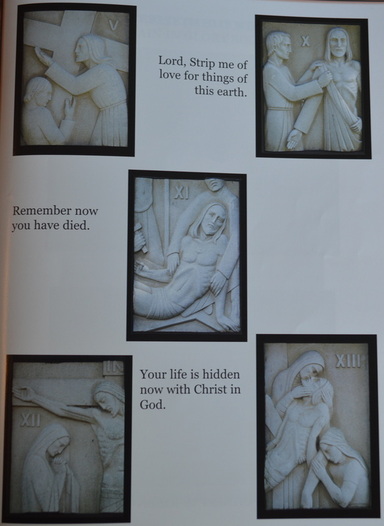 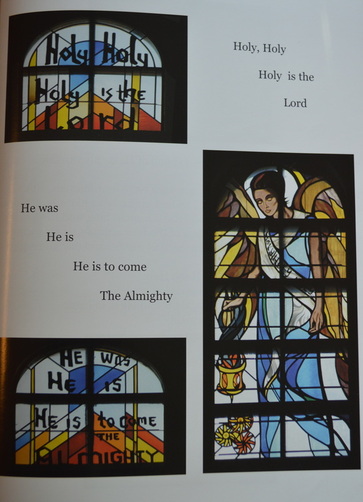 Notice how at Mass at the end of the preface, we say, “We join with the angels and saints singing Holy, Holy, Holy Lord, God of power and might. Heaven and earth are full of your glory. Hosanna in the highest.” The word “Holy” is written 32 times throughout the stained glass. You might notice, too, there are burning spinning wheels throughout the windows. These represent “the Seraphim.” The Seraphim are the angels known as the “burning ones.” The fires of heaven are hotter than the fires of hell. 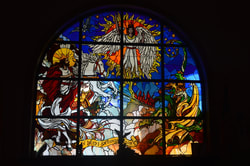 The King of Kings: When I saw the heavens opened, and there was a white horse; its rider was called “Faithful and True.” He judges and wages war in righteousness. His eyes were like a fiery flame, and on his head were many diadems. He had a name inscribed that no one knows except himself. He wore a cloak that had been dipped in blood, and his name was called the Word of God. The armies of heaven followed him, mounted on white horses and wearing clean white linen. Out of his mouth came a sharp sword to strike the nations. He will rule them with an iron rod, and he himself will tread out in the wine press the wine of the fury and wrath of God the almighty. He has a name written on his cloak and on his thigh, “King of kings and Lord of lords.”

Then I saw an angel standing on the sun. He cried out in a loud voice to all the birds flying high overhead. “Come here. Gather for God’s great feast, to eat the flesh of kings, the flesh of military officers, and the flesh of warriors, the flesh of horses and of their riders, and the flesh of all, free and slave, small and great.” Then I saw the beast and the kings of the earth and their armies gathered to fight against the one riding the horse and against his army. The beast was caught and with it the false prophet who had performed in its sight the signs by which he led astray those who had accepted the mark of the beast and those who had worshipped its image. The two were thrown alive into the fiery pool burning with sulfur. The rest were killed by the sword that came out of the mouth of the one riding the horse, and all the birds gorged themselves on their flesh. 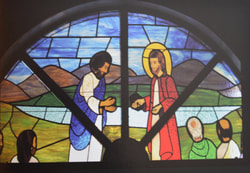